Hello, Windy city long time no see. Star Wars Celebration ended up being in one of my favorite cities this year. JediManda and I were shocked when we found out that we would be heading back north, and the fact that this convention was going to be on the East coast again this year. However, what can I say I was not complaining at all. The only thing that was different from previous convention visits this time around is that we did not have the convention host hotel. So this was going to be my first time using the convention shuttle bus, and I have to say it wasn’t all that bad. The Star Wars Celebration shuttles were rolling every thirty minutes and kept to their times. However, it was not an all-day running shuttle which meant that the lines to go back to your hotel was a little crazy. Also, did you guys know that the McCormick Place Convention center that C2E2 is normally hosted at is HUGE? SWC was being held in an entirely different convention center building and my mind was blown. I know the convention center was large, but I had no idea just HOW LARGE. Getting to explore an entirely new convention area for shoots was so much fun and I found some great areas that I pretty much was glued to.

The new building felt a little smaller than the one I was used to for C2E2, there were three main levels where the most activity was funneling through. The second floor was another area that I found an absolutely clung to. There was a wide-open room with windows from near floor to ceiling. It was a natural light photography heaven. Since I was traveling back and forth via the shuttle I wanted to make sure I wasn’t carrying a lot of equipment on me. There wouldn’t have been any room on the shuttle had I brought my case or any of my stands. So finding an area that had perfectly even light was my compositing heaven.

You guys will notice that this convention has some fairly similar color vibes. A ton of Red, White, and Black, and honestly I’m okay with that because that’s a huge aesthetic to StarWars. I mean it’s the main color scheme to the Dark Side so you know I’m totally okay with this.

I few months prior to SWC, JediManda set out to create a little bit of a wild group for her Decoy Dress Amidala. We wanted a huge non-discrimatory flaming handmaiden group to make a huge statement at the convention. So she opened it up to the public, we found some fairly cheap flame madien cosplays to buy online for those of us who are not the masters of our sewing machines. Were they the best representation of the flaming handmaidens, lord no, did we care, not at all. We were after quantity, not quality, but I will say I totally had some crazy quality time with the girls. Oh, did I mention that I too was one of the handmaidens for at least an hour before all my shoots for the day. Saturday morning we met up with all the girls which was starting to become like herding cats. The goal was to take our group shots first then walk around the convention hall and open floor plan. The ultimate group statement. We ended up heading to the magical window room for my shoot with the girls, and let me tell you we were already starting to get a crowd. Then something magical happened. The Auther to the recently published Star Wars book (handmadiens book) found us and was speechless. We, of course, got some group photo with her and there were a few tears all around.

After the photo shoot was all said and done I become the ring leader of our two rows of handmadiens and I lead them through the convention senter. Thank god I was in theatre for a few years because if you watch any videos of this group walking, I’m the hand madien in front thats yelling “ Queen Amidala Approaches, Make way for the Queen” and boy did people MOVE. I lead the pack and Amanda throughout the convention hall a few times to end up in front of the Padme Mural outside. Thats where we made our stand for everyone to take photos. I had them line up in the groups so everyone would be seen, and of course, our decoy Dress was up front and center. This experience being in such a large group and also cosplaying for the first tie in years was amazing. THough it was only for about an hour and half, it kind of lit a creative spark in me that I still having been able to scratch just yet. So we’ll see what happens in the future. � 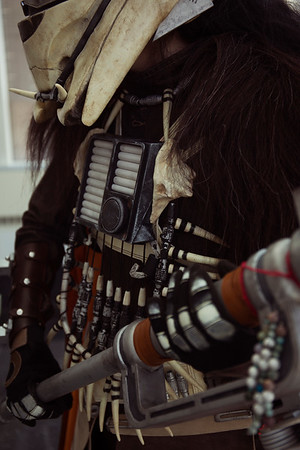 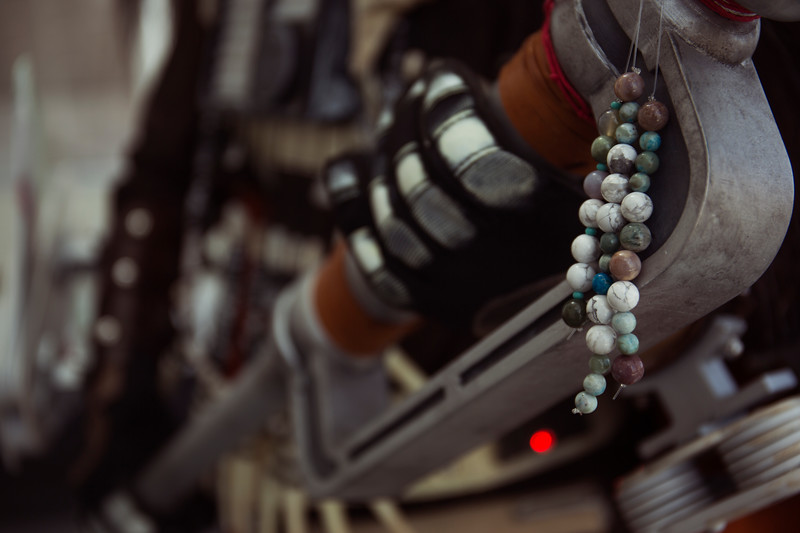 After stripping out of my handmaiden cosplay, it was off to photograph the insanely skillful SpaceLion Cosplay and her Enfys Nest. This cosplay was hands down one that I was really freaking looking forward to. This cosplay was so freaking screen accurate it was insane. I’m so freaking happy that Felicia also booked a Full Composite shoot to boot. So you know I was READY with some train ideas and desert locations. I’m really happy with how these photos turned out. I will admit trying to build the train from scratch was a challenge, but I had a lot of fun with it. Plus I think the desert images are my favorites and the closest I’ve gotten to a movie gradient to make it look like it was a still from the set.

I have been following Lunar Lynn Cosplay for a while now because of JediManda. Her work is always top notch and I was so freaking happy when she reached out to for a few photo shoots. One of them being a Queen Amidala. Unfortunately the crunch was too much and she made the right decision to postpone the Queen, and instead, we turned one of the photoshoots into a group escape from (Aldaran)? shoot with Sarah Demp, and ( pyriyte). I also had the chance to get to photograph her Hera and also her husband as Kannon. Now I have not seen all of StarWars Rebels series. However, i know what happens, because of research, and I wanted to make the internet cry. I love couples photoshoots. I. LOVE. THEM. It’s one of the closets things I get to Engagement photoshoots and I live for a nerdy couples shoot. So getting to shoot two tragic love birds is THE BEST. 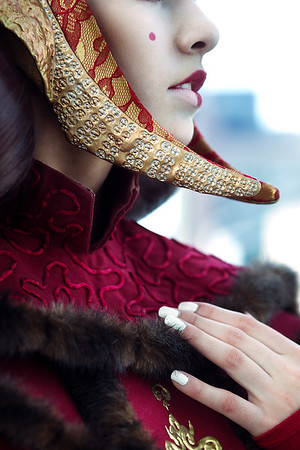 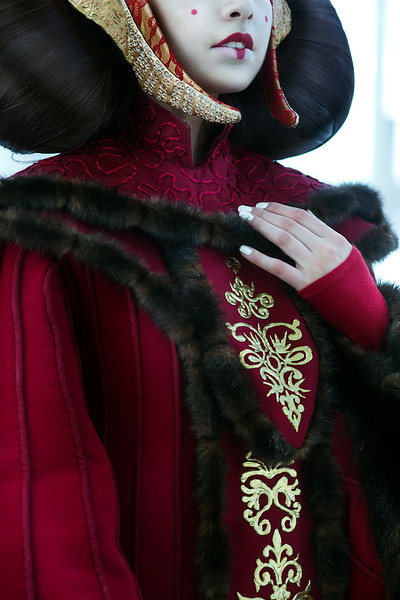 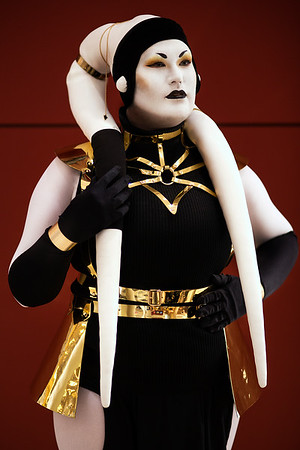 Did I mention that I love me some cute Twilik cosplays, because I freaking love Twiliks. I met Tulomn back in BlizzCon 2018, and we absolutely hit it off. I didn’t quite know what I was going to expect of her Twilik, heck I didn’t even know what color she was going to be, but oh man when she walked around that corner in this White, Black, Gold onsomble, I knew we were heading to the magical red wall. Oh, man, I loved this shoot. I never knew how much I needed a nerdy fashion alien photoshoot until this one, and you guys I would LOVE to do more. 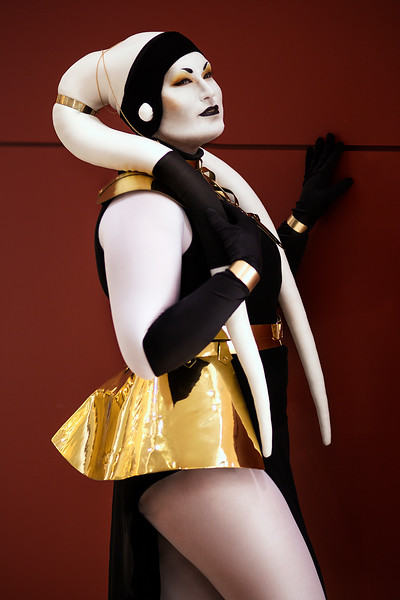 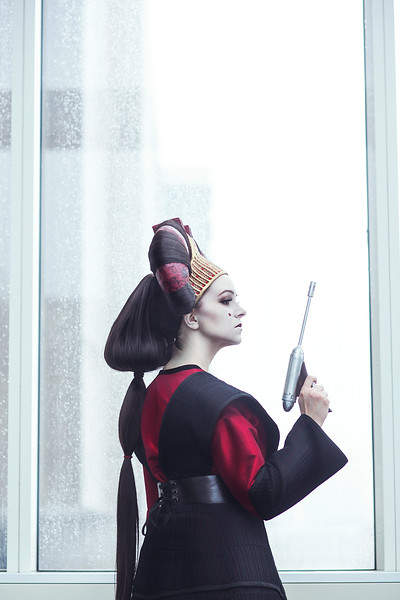 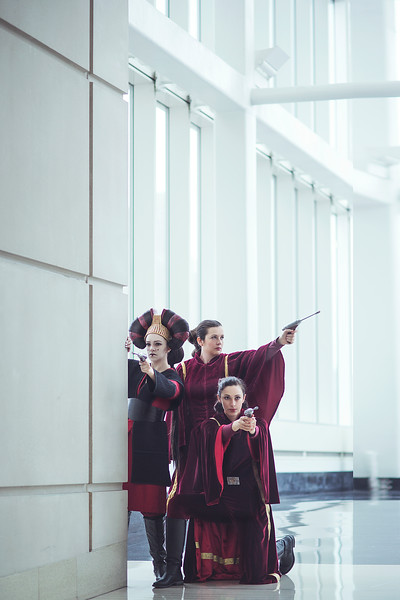 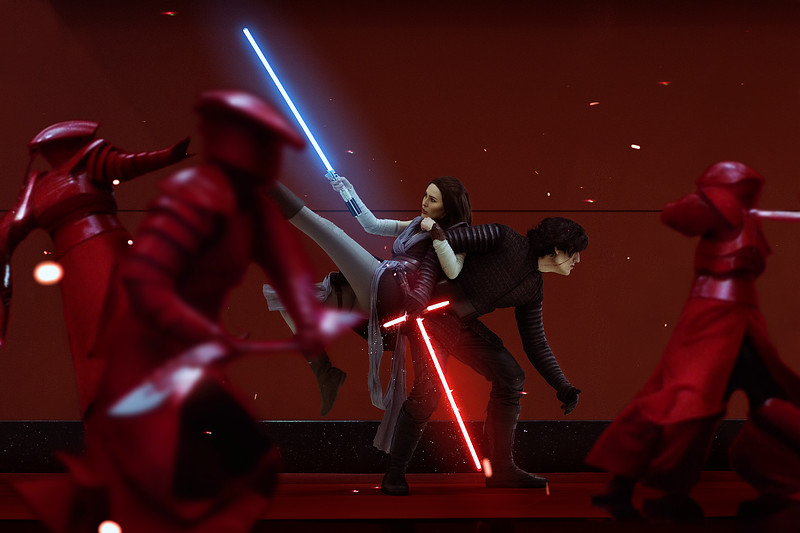 Every so often during conventions, I've able to squeeze in a last-minute photo shoot. Sometimes shoots run really really fast or are canceled and I'm very much a busy body and like to stay active during conventions. So when I ran into Taylor and Sarah it was perfect timing. I have worked with these two before up in Canada and I got to shoot my first Reylo shots that I'm still in love with. However, seeing The Last Jedi, absolutely fueled my ship for these characters and we were able to squeeze in a beautiful Reylo shoot in front of my lucky red wall. WHICH WAS PERFECT because of the red room battle scene. AGH this was one of my favorite shots from the weekend. Don't judge us! 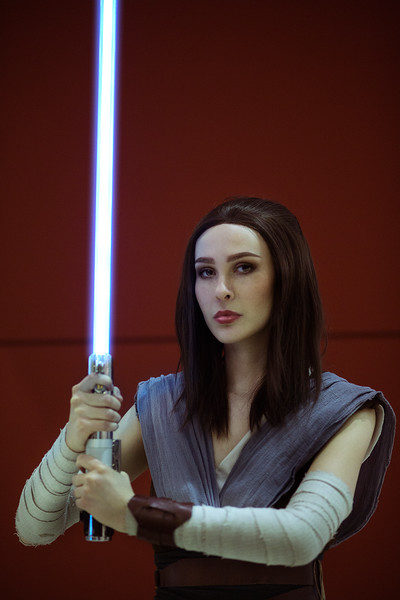 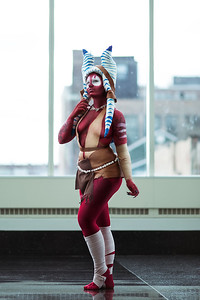 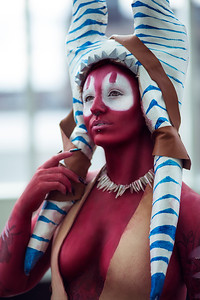 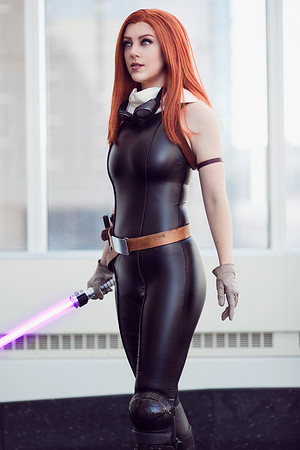 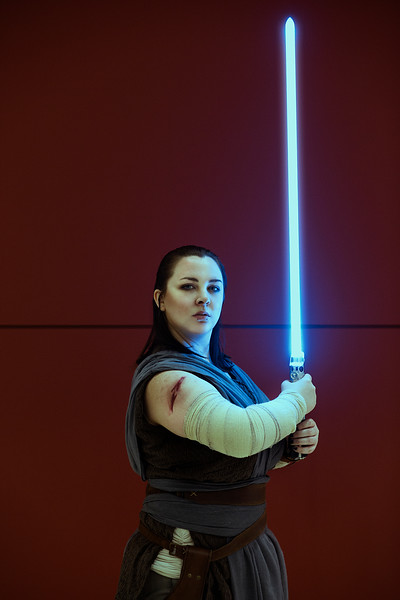 Oh man April Gloria's Mara Jade and I have had a history. When April was first making this she brought it with her to Pax South a few years back. It wasn't finished, and I don't believe she had a gun back then, but we were only able to shoot headshots. Fast forward a couple of years and she's back, and we finally were able to give her a proper photoshoot...finally.

Yall, I really hope you aren't bored with my lucky red wall yet. When I said that I shot the crap out of it I really meant that I shot the absolute crap out of it. This wall was just too freaking perfect especially after The Last Jedi fight scene I mean come on.  Which is why I had to shoot Mana on it with her beautiful Rey cosplay. I really liked her Rey because she kind of did a battle damaged version. her wounds and scaring was really cool.

The wonderful Mirror Bright Cosplay actually borrowed a friends Kylo cosplay and SCARED the living crap out of me. So this man texted me while I was about to leave to head back to my hotel and I was sitting on the ground with a friend waiting. He let me know that he was on his way real quick to show me something. So I'm waiting and waiting.... and waiting a little bit more. Then suddenly this Kylo fully masked shows up and doesn't say anything. Now he's standing fairly close, but like, not too close to where I would call him out so I don't say anything.  A couple of minutes goes by and I'm still waiting for MirrorBright and suddenly this Kylo cosplayer is about to poke me with his lightsaber and I'm just like.... excuse me? AND IT WAS FREAKING MIRRORBRIGHT the ENTIRE TIME.  He got me real freaking good yall. I was spooked and I was shocked and it was pretty funny. However, it's fine because we got him back later.

Now later that Saturday night we had a group of people come to our room to hang, and JediManda found out that more then half the people in the room had never watched the StarWars Christmas Special. So you know what we did..... we watched the whole freaking Christmas special, and I can now say that I'm officially scared. That was the most awful thing I've ever watched, but it was also the most meme-worthy thing that I've ever watched. It's officially a love-hate relationship. I do recommend you watch it... however whatever you do, please watch it with friends, it makes it a little less painful. 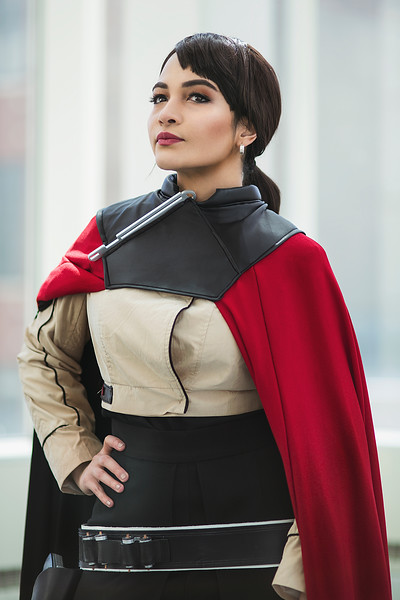 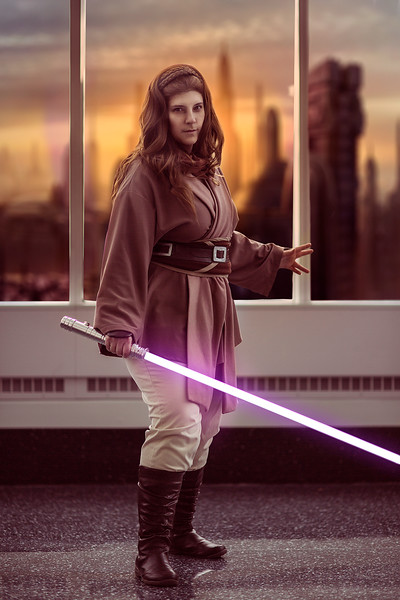 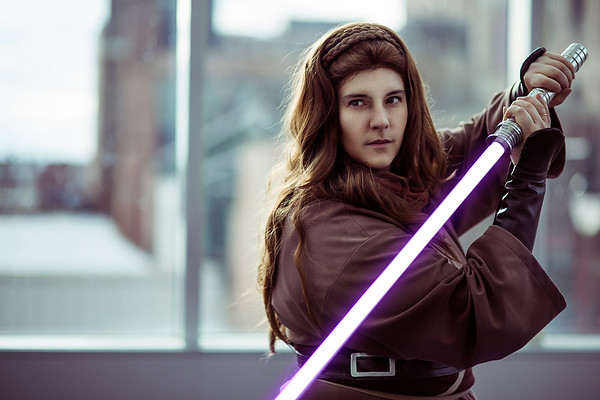 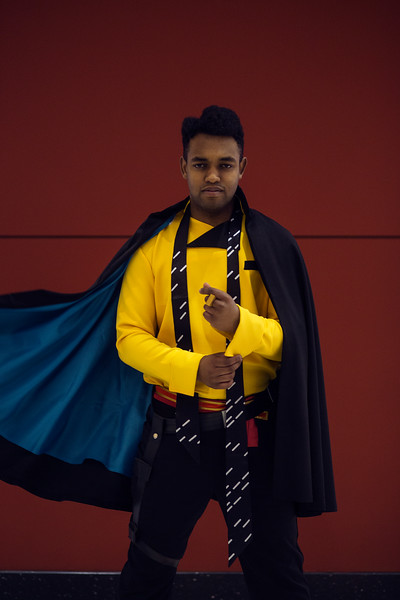 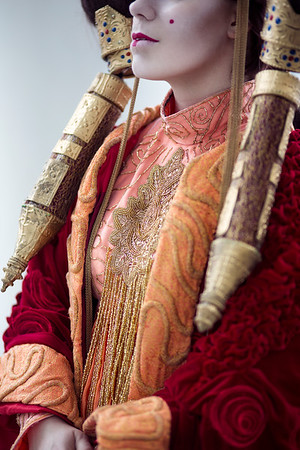 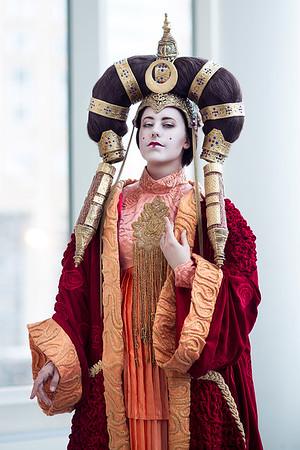 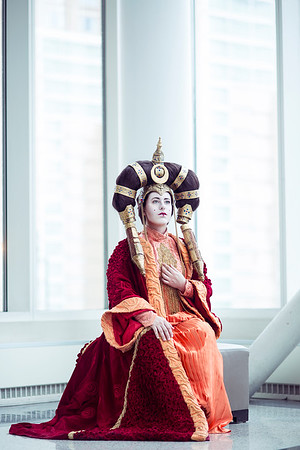 Currently booking for On location shoots in the KY, TN, IN, OH Area