Where do I even begin... for the past three years I have traveled up to Canada for an amazing event called The Mountain Cosplay Retreat. I discovered this trip from a friend who sent me an advertisement on Instagram. I canceled plans, got my passport and never looked back. Now I've made some amazing friendships through this event and I'm always looking forward to seeing their faces nearly every year. Conventions are wonderful, however, I don't know if they can beat amazing mountain and forest locations.

I've been thinking about this trip for months now and trying to plan out what kind of equipment to bring has always been a little stressful. I have lighting equipment, and stands and long lenses and so on and so forth. However, this year I didn't want to bring anything. When I do I normally don't use it, because I don't want to hike with it. So this year I decided to keep it small. I would bring my new 24mm - 70mm, my 100mm (which I didn't even end up using), and my underwater case. The rest of my case was filled with clothing since this year we were heading to Jasper Alberta.

The Mountain weather can change within a blink of an eye, it can be cloudy and a little bit rainy where you are right now, but then if you drive about 30mns to an hour away it's sunshine and blue skies, perfect for seeing mountain tops.

This year we stayed at the Pocahountis cabins within Jasper national park. It was a pretty large upgrade compared to the cabins in Birken. It's amazing the difference when you have a full working shower, full kitchen, and everyone pretty much has a bed. It was just kind of magical and I feel like everyone really benefited and felt better because of it. Not to mention this year I'm pretty sure everyone brought too much food, haha. 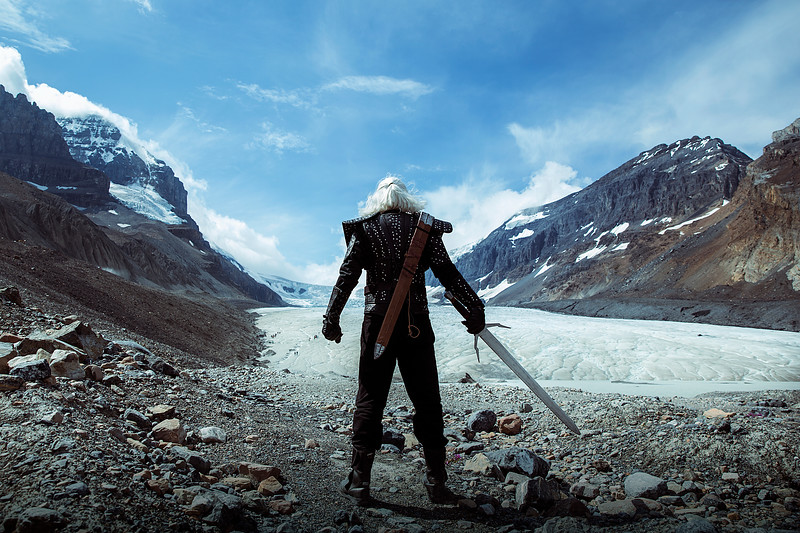 Now the way the cosplayer and photographer pairing kind of works is each photographer will have two 'mandatory shoots' each day with randomly chosen cosplayers. This way things can be a little fairer, and nobody gets too clicky. However, doing things this way by no mean means you can't work with other cosplayers that you're not partnered up with. There is plenty of time in the day to work with others. 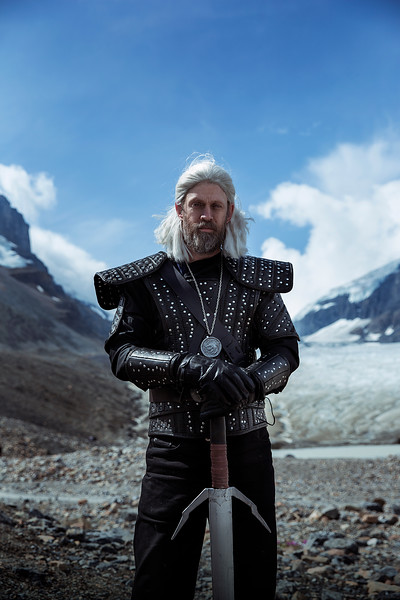 During our first day, I was lucky enough to match up with Amanda and Derrick who were also willing to drive 2 hours out to the Athabasca Glacier. We were the only group that was willing to go out that far and hike in the park, and boy was it worth it. If I'm traveling to Canada then by god I'm going to be shooting with some mountains!

Now, this might be too much, and a bit TMI, but you know what I don't really care. Mother Nature decided to be an ass hole on the first day of the trip, and on the ride up to the mountains, I was cramping like a crazy. Not to mention we were climbing in altitude the further into the park we went.  So, when we were about 30 minutes away from the trail to the glacier we decided to do a pit stop to relieve ourselves. Well, I don't know if yall have ever had altitude sickness before, but it can sneak up on you. When I exited the car it hit me immediately hit me and I almost blacked out. It was the weirdest experience, and I definitely lost my small breakfast behind the bathroom cabin.

The guys were really understanding and also offered to head back... However, if there's anything you should know about me, I'm crazy stubborn. I came to Canada, for mountains, and I'm going to get my damn mountains. So we pushed forward and headed for the trail. I'm not going to lie, it took me a hot minute to get to the top. However, considering I felt like dying and still made it to the top, I'm giving myself a pat on the back.

When we finally made it to the top there were patches of these beautiful purple flowers, which surprisingly were the same color as Amanda's Skyrim Dragon Priestess. This was just such a cool place to shoot. Once we started getting ready and I turned on my camera I realized that I felt nothing. My nausea and pains had stopped, I could stand straight and breathe the mountain gods took pity on me, and it was go time.

Both Derick and Amanda did an amazing job. The top was extremely windy, like, insanely windy, and it worked in my favor, because of Amanda's flowy cosplay.  Once we were done, I did take a few stock photos, and we were off to the next location, which was literally off the road. This huge wall of a waterfall was just too beautiful to pass up, and since I was still high off of my second wind we made it happen.

There were two sides to trek up to the falls. On the left side, there were tons of people, it also looked like there some steep areas to climb. Then again there was the right side, with no people and was hidden by the trees and was a hell of a lot easier to get up to the falls. I've always wanted to do a shoot at a base of a waterfall and I got two.

There was one thing I wanted to try while we were at this location which was a long exposure shot. I didn't have a tripod, which is the one thing you should REALLY have if you want this shot. So, instead, I just grabbed some rocks and stabilized the camera, and pray.

All in all, the trip was so worth it, worth the pain, worth the lost cookies, worth the trek, worth it all. PUSH yourself when you're uncomfortable because you never know the amazing opportunity that could be over the hill. Unless you're really dying, so like, know your limits. 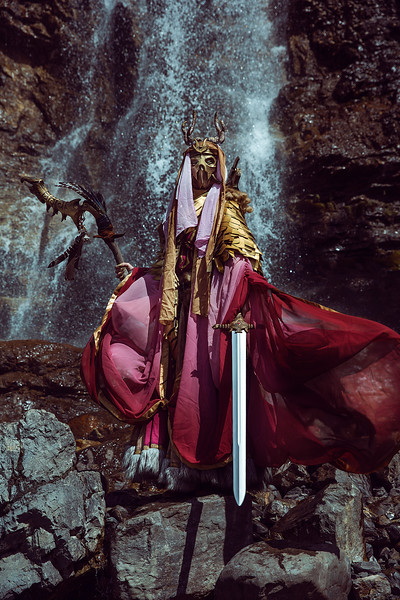 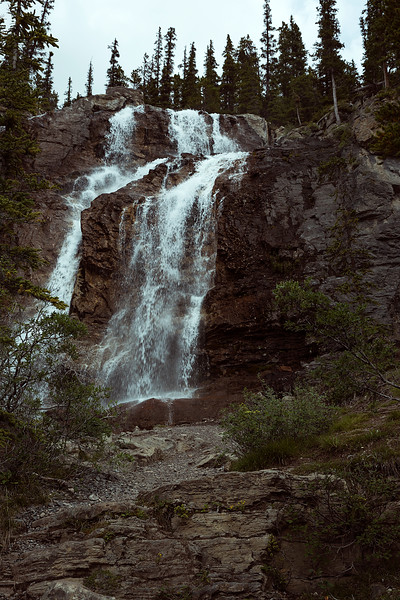 Day two I feel was not as exhausting, but equally as fun.  We explored some closer areas to the cabins including an abandoned building area, which was absolutely perfect for my shoot with Kilo. Kilo is an awesome prop maker and also a survivalist. On the ride up to Jasper, I actually learned a lot about different sources of protein out in the wild, and I was showing him the insane world of social media marketing. So with that I wanted to not only take a few portrait shots but also take some product shots for his pages and shop.

The one cosplay Kilo brought up to the mountains was his awesome vault survivor from Fall Out. Normally with FallOut shoots, I've done in they're based in the desert in rocky terrain. So it was really fun to switch things up and have it a nuclear fall out forest. 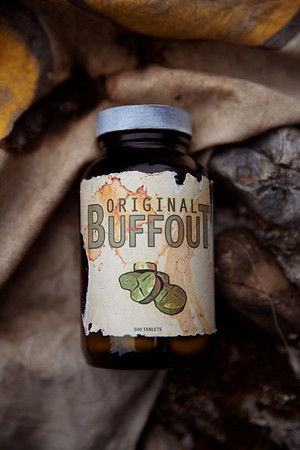 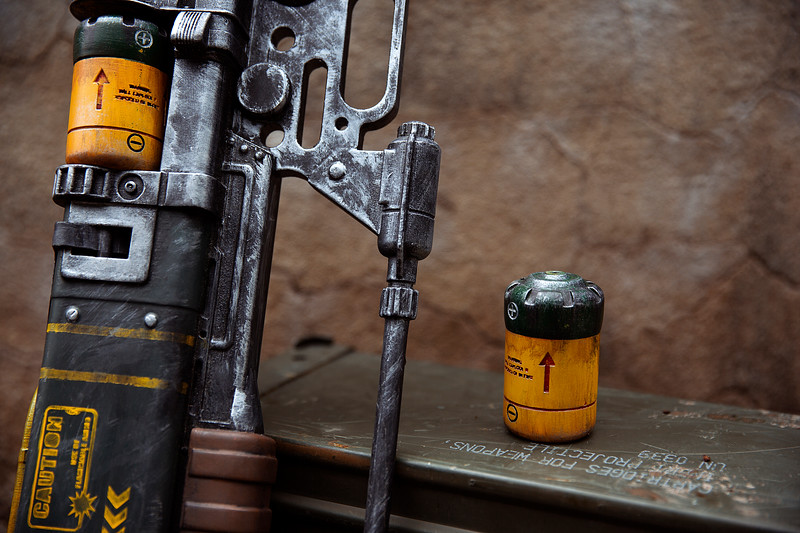 During day number two we got a little wet and wild! I do it every year I have to get into that water. Though this year it was a little warmer than the past years. The cabins had an outdoor heated pool and it finally happened the shoot I've been waiting for since Amanda made her River Spirit Nami.  We did a full-on underwater shoot with Nami!

The outdoor pool even had a deep end, which would be my fire time shooting in a deeper pool. Luckily I also had a model who was an experience mermaid swimmer. One shoot I've always wanted to do is a full-body portrait shot of a mermaid, and I'm so happy to finally get it.

Underwater shoots are very tricky. A lot of it is honestly luck and try trying again.  You can't really look through the viewfinder when you're under. Your best bet is to try and get your best composition and your focus.  The most important thing about this shoot though was Amanda's safety. Happily, I did have some help during this shoot and had someone throw a life raft every time Amanda came up so she could have something to float on.

The underwater case that I have is like a bag case. I've had it for years and has served me well. However, my case is a little leaky and I have to constantly watch it JUST in case. I'm hoping to get a new case next year so I don't have to worry about it, but they're a pretty penny.

Regardless of the trials, underwater photography takes, if you and your model are patient enough you will be able to get some great shots.

While in the woods I also did a miniature shoot with the wonderful Michelle and her Worm King Cosplay.  Since this character is a major badly I wanted to change up the tree color and give the surroundings a menacing vibe.

Afterward, I also shot the wonderful Jessica as Gnar next to this gorgeous river with beautiful boulders. It was a perfect match for her shoot. 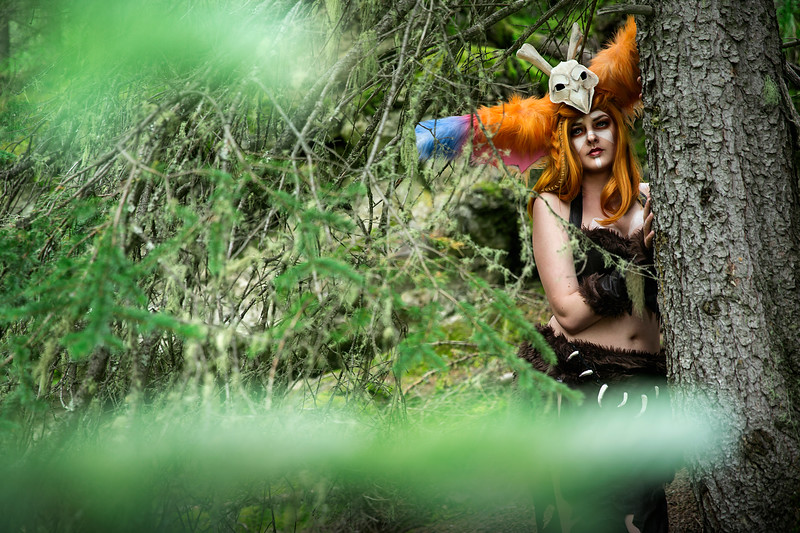 Overall, I will forever attend this event. I absolutely love the community Mountain Cosplay Retreat has created. The locations are always to die for, and the cosplays are top-notch. This trip is hands down one of my biggest highlights of the year, and if you ever have a chance to go to one, then you should.

Currently booking for On location shoots in the KY, TN, IN, OH Area